There is no one reason for the higher Covid-19 infection rate in Catterick Garrison than elsewhere in the county, say health chiefs.

Catterick Garrison and Colburn had twice as many positive cases over the seven days to February 21 than anywhere else in North Yorkshire, according to the latest official figures.

There were 42 confirmed cases in the area over that period.

The seven-day rolling rate currently stands at 248 cases per 100,000 people in this area of Richmondshire, compared to a district-wide figure of 115. 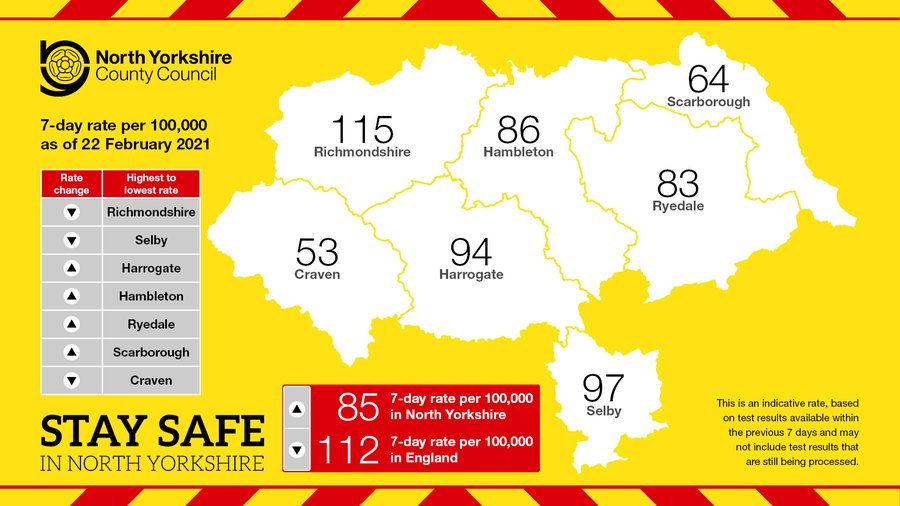 Louise Wallace, North Yorkshire’s director of public health said Covid infection rates for North Yorkshire were slowly reducing and were lower than the national and Yorkshire and Humber average per 100,000 population.

However she told Richmondshire Today that rates in the county’s seven districts were fluctuating.

She said: “In Richmondshire, which includes Catterick and the Garrison and where rates have increased slightly overall in recent days, this is due to a number of factors relating to infections in care settings, work places and through community transmission.

“There is not one single factor leading to this increase.

“In North Yorkshire our message is loud and clear  –  Covid infection rates may be falling significantly but in nearly every district they are still three to four times higher than they were last September when Selby and Scarborough were put on the Government watch list.

“We must remember that the speed at which we come out of lockdown will depend on data not dates. It’s been a very long winter of restrictions, but we have to give it one last push and keep going.

“We must carry on, therefore, with all the social distancing and safety measures, wearing masks, washing hands, staying local and not mixing indoors to get the rate down as much as we can.”

Elsewhere in the district, the number of confirmed cases in the seven days to February were: