When you can mix Mud’s hit Tiger Feet with Lego, Cindy dolls, Airfix kits and the legendary Biba fashion house with crimplene, you are surely onto a winner!

The History Wardrobe kicked off Kiplin Hall’s festive season in some style last night as their show on all things 1970s was infectiously enjoyable and effervescent.

History Wardrobe – a costume in-context presentation to a Kiplin Hall audience, was both factual and funny as it took us back to the days before mobile phones, iPads and WiFi.

‘Wardrobe’ actors the two Lucys – Lucy Adlington and Lucy Ridley – were terrific as they ran the crowd through memories of the decade that gave us Glam Rock, Punk and over-cooked Brussel sprouts on Christmas Day. Remember those?

The show kick started the hall’s festive season, which is headlined Kiplin Goes Kitsch, a celebration of the world which existed in the 70s. It was a decade which now seems ridiculously innocent, not surprising, as we enjoyed only three television channels back in those days and most houses still had black and white TVs.

The History Wardrobe show, entitled Glamorama, worked a treat as the Lucys set the scene on a Christmas Eve in the 70s, with daughter Lucy (Ridley) over-excited at the thought of the presents her mother Lucy (Adlington) would bring.

It turned out to be gifts like an Anne Boleyn Airfix kit (gender equality didn’t really exist back then) to a Cindy doll, to a Lego set and a ladies Chopper bike.

Mother Lucy attended to the sprouts, which would be over-cooked for around four hours, then returned to educate and titillate the audience on the various fashions of the day, which included the end of the Biba era and the start of the Punk generation, via Glam Rock. Some of the items were truly toe-curling, but as Lucy said, these were fashionable back then. Even mega-tight hotpants made from lame!

In two hilariously unscripted moments mother Lucy then nearly took out one of Kiplin Hall’s lights, before her Harrods 70s gown split, very loudly, at the armpit.

A fit of the giggles ensued before both Lucys danced to Abba’s classic ‘Dancing Queen’ and daughter Lucy ended her angelic years by becoming a Punk rocker! 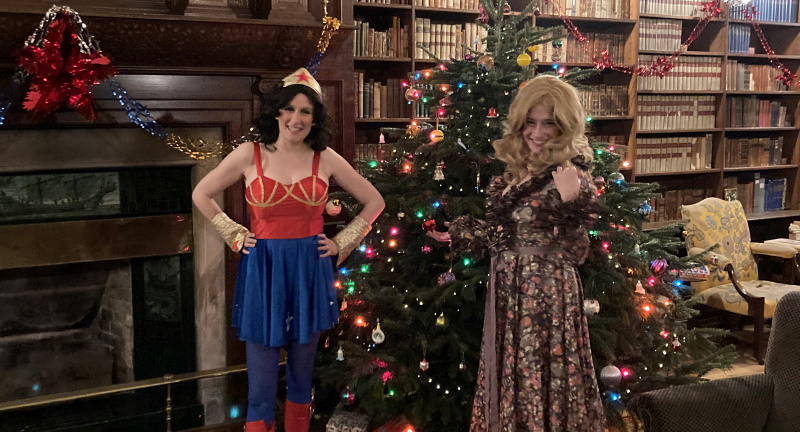 Kiplin does Kitsch will include foil decorations, macrame baubles and best-selling toys from the era, all of which will decorate the hall’s historic Jacobean rooms, while fashions of the day will strut on the Long Gallery catwalk.

Curator, Alice Rose, said: “Described as the decade that made modern life, the 1970s were a really interesting time. This event is very much a celebration, intended as a tonic after a very strange couple of years. The toys and decorations on display are intended to bring back fond memories for people from their own lives.”

“By exploring a more recent and recognisable period we are able to stimulate people’s own memories, starting conversations about days gone by and how much life has changed.”

The displays will also look at the economics of the 70s such as the winter of discontent, when rubbish piled up in the streets and bodies were not buried due to gravediggers going on strike, as well as power cuts and the three-day week.

The display is open to the public from Friday, November 26 through to Sunday, December 12 when the Hall and Gardens will close for winter until the snowdrop season in February 2022.

The retro Christmas is included with standard admission.

Tickets are valid for 12 months during opening hours, so tickets purchased in 2021 will be valid until this time next year, offering great value for individuals and families. For more information go to www.kiplinhall.co.uk