Fence posts for a Dales village playground from North Yorkshire County Council worked out 500 per cent more expensive than those provided by local companies, Bainbridge parish council was told this week.

Council clerk Karen Prudden told members that the highways department had quoted £2,500 for replacing eight to ten posts at the side of the park next to the main A684.  Meanwhile 24 posts provided by the Gayle Mill Trust at Hawes and prepared for fitting by Metcalfe Joinery of Bainbridge would cost just £1,300.

Councillor Darren Percival said the Gayle Mill posts were made of larch and were now prepared and ready for fitting.

“They have been primed, undercoated and glossed. They are solid and weighty with a long life expectancy, and I would say very good value” he said.

The money had come from the Lords of the Manor, the sports club and the millennium fund, said council chairman, James Peacock.

Mrs Prudden suggested the county council could apply for funding for the posts along the highway from the Safer Roads Fund, as the A684 was part of that scheme.

“Maybe we could point them in the direction of the Gayle Mill Trust,” she said.

Meanwhile Mrs Prudden reported as cemetery superintendent that the terms of use of the cemetery had been changed to reflect concerns that one undertaker in particular was making “unacceptable demands.”

She had given hm three weeks’ notice of a grave that was “particularly tricky to dig,” and said it would take time and care. Yet the firm had arrived on the day of the funeral with a mini mechanical digger, stating that the parish council would have to take responsibility for any damage they did.

“This was unacceptable and I have changed the terms of use to ask for respect to be shown to existing graves and pointing out that any damage caused would be at the funeral director’s expense,” said Mrs Prudden. If the funeral director objected the council would use their own gravedigger. She had also removed permission for glass jars to be placed on graves as many of them fractured. Members agree the changes and Cllr Percival pointed out that any bona fide funeral director would surely carry indemnity insurance. He himself had repaired a section of the boundary wall that was in danger of collapse and there was a new lock on the sexton’s shed. The railings and gates had been made good and gloss-painted.

Councillor Derek Kettlewell of Stalling Busk who was not present reported “good meetings” with Matt Neale of the YDNPA about the condition of the Stake Road, and with Ben Jackson, public rights of way officer for North Yorkshire County Council. The new owner of the late Alan Ball’s house had asked if a No Through Road sign could be erected on the road leading to the hamlet, to prevent vehicles turning round near his home, but councillors agreed that a sign saying “Stalling Busk only” spoke for itself. The village was otherwise in danger of “sign pollution.” 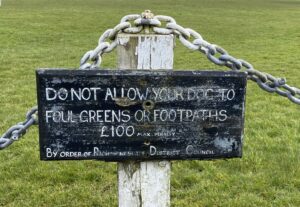 Dog fouling on the path from the back of the national park authority’s office to the school was becoming an increasing problem, said Cllr Percival. Members considered whether a dog waste bin could be placed in the car park at Yoredale.

Permission would have to be sought from the authority but enquiries made  first of Richmondshire District Council to see if it was on their waste collection route.

A resident had left a legacy of £5,000 for “the sole purpose of upkeep of the village green,” said the clerk. Members agreed a letter be sent to the family via their solicitor, Michael McGarry, to say “a very big thank you.”  Cllr Yvonne Peacock said the resident’s mother had previously donated the mowing machine for the green. “As a family they have been very generous,” she said.

Census Day was Sunday, March 21, and Katie Callum of Richmondshire District Council had told Cllr Peacock out of the meeting that “a raft of help” was available to anyone who needed help completing the online form or obtaining a paper form. They could call freephone number 0800 141 2021, or contact Ruth Dyble, local engagement manager for Craven, Hambleton, Harrogate and Richmondshire, on 07452 942849, or email ruth.dyble66@field.census.co.uk.

The Upper Dales Community Partnership based in Hawes could also point people in the right direction she said.

The meeting was held via Zoom because of Covid restrictions.