Wensleydale Railway Plc shareholders have voted in favour of selling off Aysgarth Station to a private rail enthusiast to clear its debts and secure its survival.

The vote was taken today at the company’s annual general meeting held in Leyburn Methodist church hall, with shareholders come from across the country to attend.

The vote to sell the asset came despite concern among some supporters who felt the station should not be sold off as it could prevent the line’s eventual aim of running trains from Northallerton to Garsdale.

Board director Steve Davies told shareholders the sale of Aysgarth Station would create capital to invest in infrastructure and significantly reduce mortgage and utilities bills.

A development plan was outlined with objectives that included assisting the new owner to connect Aysgarth Station to the line, which currently stops at Redmire.

The aim for a new station at Castle Bolton was discussed.

A plan to improve Leyburn Station and make it the eastern end of a regular shuttle service to Castle Bolton and eventually Aysgarth, which is considering the most picturesque part of the line, was also outlined.

Other objectives of improving Leeming Bar station, building a maintenance facility at Leeming Bar, improving volunteering and bringing automated level crossing equipment up to date were also included in the plan.

Mr Davies told Richmondshire Today afterwards that the meeting had been very positive and there was now clarity over the direction of the line, with the focus now on building a successful heritage line rather than a public railway.

He added: “We have a mandate to enact a heritage line that can hold its own against the best in the UK.”

“The sale will result in Aysgarth Station remaining a railway site.

“Firstly it will release capital to invest in steam infrastructure which is what the public wants and secondly the new owner is going to lay track.”

Former Wensleydale Railway chair Ruth Annison, who before the meeting had expressed concerns about the sale, said she still, had reservations.

She said: “There’s no doubt it’s a strong board with a very strong aim, but the sale is still a risky strategy.

“The intended buyer is not being revealed so we cannot check their background.”

She said she had received more than a hundred letters from people concerned about the sale ahead of the meeting.

“The aim has always been to have tracks running from Northallerton to Garsdale and buying selling Aysgarth Station there is a fear we are giving away control of the golden nugget.”

But Wensleydale Railway general manager Nigel Park said the vote allowed the staff and volunteers to “crack on” building a successful heritage line.

Documents seen ahead of the meeting by Richmondshire Today revealed that the railway is in a difficult financial situation.

The PLC board is looking to improve its finances with initiatives including enhanced catering and more steam services.

However, the documents say that the railway also needs to reduce costs and realise the value of assets.

One of its few assets is Aysgarth Station, which it pays a mortgage on.

The PLC has been looking to sell the station and an offer has been made from someone described as a “wealthy railway-focused individual”.

They are offering to buy the station for £400,000, which is almost the valuation price.

The sale of the station would then allow the railway to clear the £195,000 mortgage on the site and invest the rest in the running of the line.

The report put before shareholders today states that the new owner would reinstate the track at Aysgarth Station.

He would then operate it as a hobby railway, with public access on certain days of the year.

The man is also interested in extending the line eastwards back towards Redmire, acting in partnership with Wensleydale Railway, and has expressed an interest in extending westwards towards Hawes too.

The report states: “The board is convinced that this situation offers the best of both worlds: a significant capital sum for the railway, and the extensive development of Aysgarth Station and possibly reinstatement of track along the route eastwards.”

However, the report added: “Shareholders should, however, be in no doubt of the critical nature of this sale to the very survival of the railway.”

But not everyone backs the plan and there was a ‘Save Aysgarth Station’ banner on show at today’s meeting. 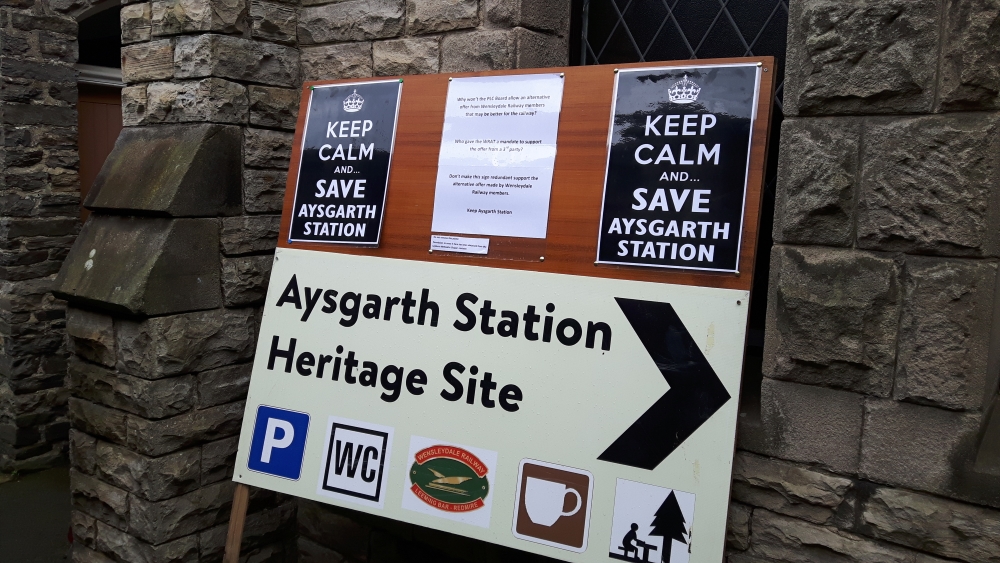 Before the meeting shareholder Bruce Yarborough called for the station not to be sold off to a private individual.

He told Richmondshire Today: “There has been no consultation with shareholders on this, or members of the Wensleydale Railway Association, who are major shareholders in the company.”

He said a group of Wensleydale Railway Association members were hoping to get together enough money to buy the station themselves.